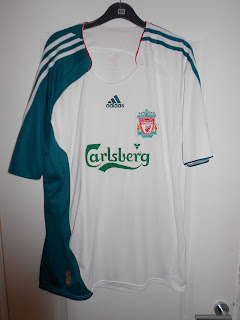 This shirt is probably most famous for being worn when Liverpool beat Barcelona 2-1 in the Nou Camp thanks to goals from Craig Bellamy and John Arne Riise. Their was uproar before the game as supposedly Craig Bellamy had hit John Arne Riise with a golf club in a fit of rage which created Bellamy to do this after scoring. Liverpool lost the second leg 1-0 but went through on away goals.
Posted by brad147690 at 15:27