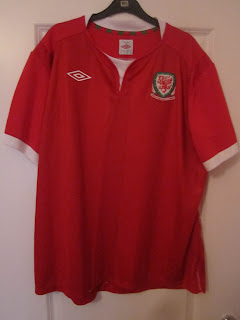 Wales latest home shirt. Wales have been on the rise recently although FIFA have labelled them as a bottom seed in the World Cup qualifying groups which was a bit of a surprise. I'm sure they could beat teams like Azerbaijan who are seeded higher. Wales have reached one world cup in which they got to the quarter final in 1958.
Posted by brad147690 at 03:35