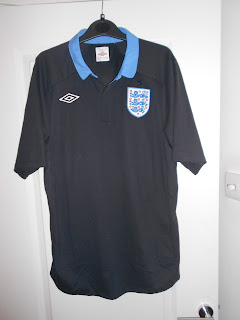 
This is my favourite English shirt. It is different to have a shirt that isn't red or blue for England. I orginally ordered a Soccer Aid Rest of the World shirt but when it arrived from JJB it was just a plain Umbro shirt. I emailed them and they say it should take 1 day to get a reply but 5 days later I now get a reply saying they will refund me for the shirt. Unknown to them I had already gone into the shop and got a refund and bought this shirt with the refunded money. So now they have given me two refunds which basically means I got this shirt for free. Now to wear this when Carroll heads in the winner to gift England the European trophy.
Posted by brad147690 at 13:42