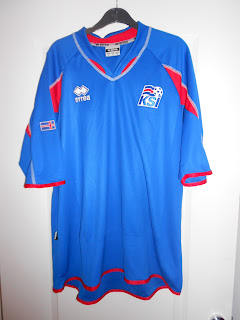 
Iceland are actually ranked 131st in the world which was a surprise to me as they have a few decent players in Gylfi Sigurdsson, Aron Gunnarsson, Eggert Jonsonn, Gretr Steinsson, Heidr Helguson an have had past legends like Chelsea's own Eidur Gudjohnsen and Ipswich legend Herman Hreiderson. They recently have qualified for a lot of under 21 tournaments and under 19 under 17 etc tournaments so I expect them to rise up the rankings soon enough. As long as an ash cloud doesn't form because of another volcanic eruption meaning they can't get to their games. A really nice shirt though.
Posted by brad147690 at 04:17