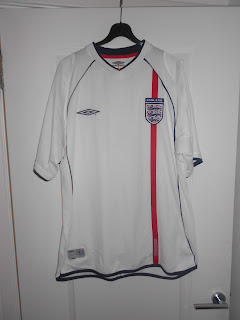 
This shirt was worn during England's unsuccessful 2002 World Cup campaign. The qualifying campaign to get there was more memorable though with a 5-1 win over Germany and then possibly the best ever solo performance from David Beckham managed to get a draw vs Greece which automatically qualified England that year. But then Ronaldinho was the problem as his free kick went over Seaman and knocked the English out.
Posted by brad147690 at 02:08