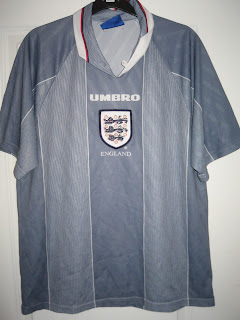 England after losing on penalties to Germany I finally got this shirt after being outbid on ebay for quite a lot of these. This shirt was worn during Euro 96 when England hosted the tournament and got to the semi final. Unfortunately England's downfall again was a penalty shootout in which Gareth Southgate missed from the spot leaving Germany to score and then go on to win the whole tournament. If only Gascoigne had slightly longer legs then England would of won but it wasn't meant to be.
Posted by brad147690 at 10:24