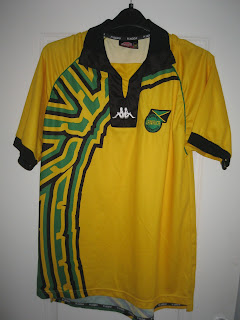 
This shirt was worn during Jamaica's only ever world cup. Jamaica now are probably more well known for their bobsleigh team and if you haven't seen the movie "Cool Runnings" about the Jamaican bobsleigh team then you really should. Everyone recently wanted to be Jamaican after their success in the 100 metre sprint at the Olympics with Usain Bolt winning the gold medal again. Jamaica have only ever qualified once for the world cup in 1998 where they wore this shirt.
Posted by brad147690 at 01:55