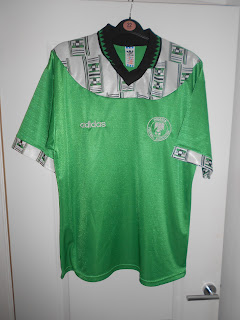 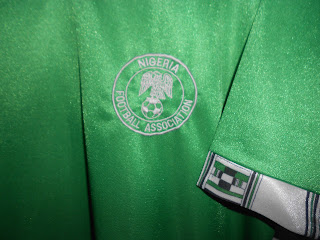 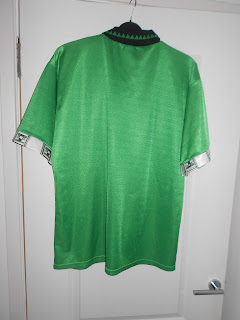 
This kit is from the 1994 World Cup where Nigeria made their first appearance. They faired well in the 1994 World Cup as they topped their group which set up a tie against Italy. They took the lead in that game and was within 2 minutes of qualifying before Roberto Baggio scored a goal which took the game into extra time. Baggio then won the match by scoring a second in extra time. They returned again in 1998 and again managed to get through the group stage before losing 4-1 to Denmark. Again they returned for the World Cup in 2002 but they could not get through the group stages this time. They failed to qualify for the 2006 World Cup before returning to the World Cup in 2010. They could of possibly qualified if Yakubu could score an open goal but he somehow missed it. YouTube Yakubu miss if you do not know what I am talking about.
Nigeria have won the African Nations in 1980 and 1994 but have not faired too good recently. Maybe they can win the 2013 tournament?