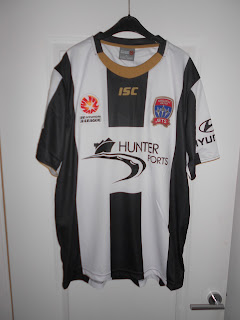 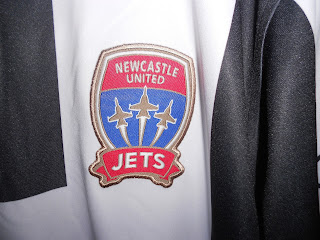 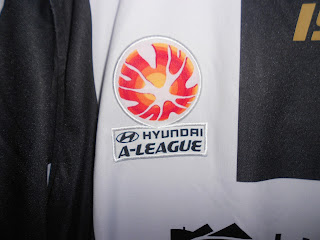 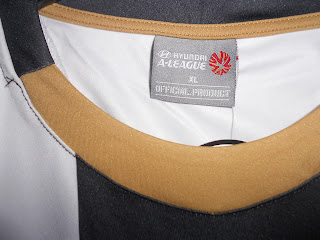 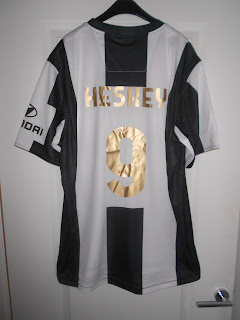 Well this arrived today as a Christmas present to myself. A few years ago if you said would you want to buy a Newcastle Jets shirt I would of said no but now there is a man named Emile Heskey that now graces their team. For this reason alone I feel that people should buy these shirts. The shirt came from an online shop called Lovell Soccer and the printing is not official A-League printing but the average person on the street will just look at the shirt and be like look he has an Emile Heskey shirt.

I suppose I (Well Wikipedia) should give you a brief background of the Newcastle Jets. Newcastle Jets is a professional football club based in Newcastle, New South Wales, Australia. The club competes in the A-League and plays its home games at the Hunter Stadium. The Jets have won one A-League championship, defeating arch rivals the Central Coast Mariners 1-0 in the 2007-2008 grand final. In 2009, Newcastle played in the AFC Champions League for the first time reaching the round of 16. The club was formed in 2000 when it joined the National Soccer League (NSL) as Newcastle United, and was only one of three former NSL clubs to appear in the A-League. They are more commonly referred to today as the Newcastle Jets.

That's enough about the club, now back to the beast that is Heskey. His full name is Emile William Ivanhoe Heskey (beastly name) and he was born on the 11th January 1978 and is of Antiguan descent. He has the same birthday as my mother so I like to celebrate my mother's birthday and then dedicate some of these celebrations to Emile Heskey as well. Heskey started his career at Leicester City before making an £11 million move to Liverpool in 2000 which was a record fee at the time. Being a Liverpool fan, this is where I started to like Heskey quite a lot. He spent 4 years at Liverpool winning a treble with them in 2001 before moving to Birmingham City in 2004, then Wigan Athletic in 2006, Aston Villa in 2009 and Newcastle Jets in 2012. Heskey played 62 times for England but only scored 7 goals. Although this sounds like a rubbish goal scoring record (well it is a rubbish goal scoring record) Heskey actually was quite an integral part for England's strike force basically beasting defenders out of the way to allow strikers like Michael Owen to score goals.

Heskey recently has been featured by a YouTube sensation called KSIolajidebt and if you haven't watched his videos on YouTube then you should as he is quite funny. He likes Heskey that much that he even made a song about him which I believe was in the iTunes charts for a bit. You can listen to the song in this video.

Another video of Heskey by the same person about Heskey's skills in the FIFA game series.

A video of Emile (Emily as the producer says) Heskey on the Rod Hull and Emu show destroying an assault course.