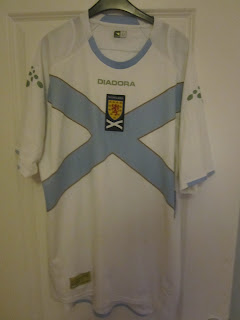 
Shirt that was worn in the 2008 World Cup qualifying stages and the shirt when they beat France in their own country thanks to a James McFadden wonder strike. Scotland have made 8 world cup appearances but have struggled to do anything recently.
Posted by brad147690 at 06:38