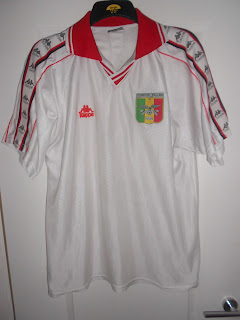 
Ahh I bring you the shirt of Mali now. Mali is probably my favourite footballing country and I will now tell you why. Before Frederic Kanoute announced his desire to play for Mali I had never heard of them but then once he did I did a bit of research on them and found out they had quite a few decent players. Although now Kanoute has retired from international football if I am correct. I have then been Mali on pretty much every Football Manager game and they were my favourite team to be on the FIFA World Cup game 2010. Soumaila Coulibaly had a rocket of a shot for them on it so if you still own it, go be Mali and play him and you'll see what I mean. Also one of Liverpool's worst players at the time is a national for the side. That player is Djimi Traore but I liked him for how bad he was at times but then he'd go and do something brilliant. Momo Sissoko who was at Liverpool for a few seasons also is from Mali and they have players like Seydou Keita of Barcelona and Mahamadou Diarra who is now at Fulham. So yeah a pretty decent squad overall. I'd suggest people to be them on Football Manager to if you have them.

As you can see from this write up, I quite like Mali but still would really like to own one of the Airness brand national shirts that they now use. Or an older version Airness to. If anyone knows of how to get one then please do get in touch.
Posted by brad147690 at 09:07