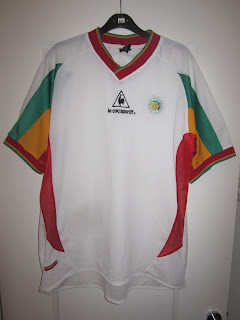 
This shirt was the one that Senegal wore when they beat France in the 2002 World Cup and surprisingly made it through the group stages. No one gave them a chance but they infact played very well and quite a lot of the Senegalese players were scouted for top clubs including the likes of Salif Diao and El Hadji Diouf who signed contracts for Liverpool. Senegal recently have not been much of a force though after going out of the last African Cup of Nations in the group stages although they do currently have a great strike force in Demba Ba and Papiss Cisse who represent Newcastle at club level. Senegal will also be in the upcoming Olympics and will be in Great Britain's group so look out for them.
Posted by brad147690 at 14:36