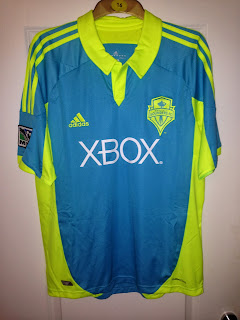 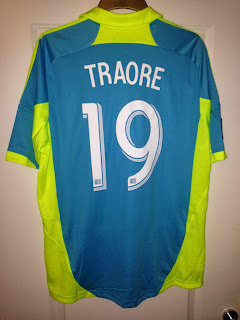 As you can probably guess from the amount of Liverpool shirts I have, I am in fact a Liverpool fan. Djimi Traore was the left back for Liverpool when Liverpool beat AC Milan on penalties in that famous comeback from 3-0 down. If it wasn't for Traore clearing one off the line then Liverpool may not have won that night. Djimi Traore has become a sort of cult hero for Liverpool fans, well for me he has. He was quite good off the ball at tackling but then his clumsiness on the ball did let him down quite a lot. One of his famous clumsy moments is his own goal against Burnley which knocked Liverpool out of the FA Cup 3rd round. On the other hand Djimi Traore at the start of his Seattle Sounders career scored one of the best volleys you'll see from a left back. When you realise it was Djimi Traore that scored the goal you just have to look in amazement at it.